Precision Performance & Physical Therapy specializes in the treatment of athletes; particularly runners and triathletes. However we also see many other athletes including golfers, yogis, soccer players and more! We do no discriminate.

At Precision, we believe you have the right to choose how you w...

We kindly ask that you notify us no later than 24 hours in advance for all rescheduling and cancellations. Thank you.

Request an appointment at this clinic

This clinic only accepts appointment requests over the phone. Please use the number below to call the clinic and request an appointment.

Did you know you no longer need a prescription to get physical therapy in Georgia?

New laws in direct access allow you to self-refer for physical therapy in Georgia. 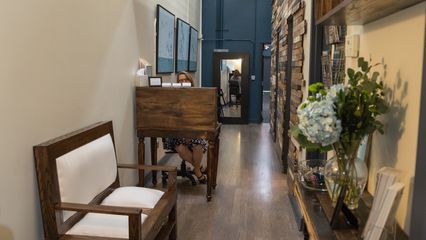 Precision Performance & Physical Therapy specializes in the treatment of athletes; particularly runners and triathletes. However we also see many other athletes including golfers, yogis, soccer players and more! We do no discriminate.

At Precision, we believe you have the right to choose how you want your healthcare experience to be. We believe that your story is just as important as the body part you injured. Our intention is to provide you with exactly what you need to get well or perform better.

Our approach is both holistic and evidence based. Education and collaboration are important to us. We treat the whole person, identifying the root cause of your issue from the beginning.

We understand that the foot and ankle can cause hip and back pain or vice versa. Each aspect of your musculoskeletal system is interconnected and can have an impact on how you are moving and feeling.

Let us help you get back to what you love!

Ryan’s story begins when he was eight years old and he went golfing with his dad for the first time. He quickly fell in love with this strange, new activity while hitting old, beat-up golf balls into the outfield of an unused baseball field. From then on, he considered himself a golfer. He went on to play on his middle and high school teams and competed in several regional and state tournaments. Always one for trying new activities, Ryan decided in high school that he would join the cross-country team with some friends of his. This quickly became his second passion, and Ryan soon was found either on the golf course or deep in the woods on a trail run. His passion for these two sports continued during his college career at the University of Florida. One summer, as Ryan was attempting to ramp up his training volume, he began to experience debilitating knee pain. When he went to the family orthopedist, he was told he needed surgery on his 19-year-old knee and would never run the same again. Crushed, Ryan returned to school that fall not knowing what to do, for it seemed like his running days were over. Eventually, he decided to see a running specialist orthopedist back in Gainesville, FL, was diagnosed with a very treatable knee condition and was referred to physical therapy. This is when his life course changed for good. Upon meeting his physical therapist, Scott, who just happened to be the running expert at the clinic, Ryan decided that this was the career for him. He changed his major to exercise physiology and never looked back. Ryan then received his doctorate in physical therapy from the University of Florida, and took an interest in both the golfing and running populations. He also received a certification in strength and conditioning from the National Strength and Conditioning Association. Now, Ryan is still an avid golfer, runner and weightlifter. Ryan has played nearly every sport he can access and has competed in adventure races, golf, cycling, spikeball, disc golf, marathon, half marathon, 5ks and 10ks. Ryan loves blending strength and conditioning into both the golfing and running realms and believes there is much to be gained from both sides with this combination. He believes that in order to treat an injured body part, one must treat the person as a whole. Injuries do not exist in a vacuum, and humans are complex beings. Ryan brings a diverse portfolio of experience and leadership to every client. He has been treating as an outpatient physical therapist in Atlanta since 2015 and has worked with a variety of people from all walks of life. He has had extensive leadership training and has served as a clinic director as well. He has learned from some of the best minds in running and endurance athlete treatment and is continually updating his trade. He has training in dry needling and advanced spinal manipulation techniques from the American Academy of Manipulative Therapy. Additionally, he has taken and passed Titleist Performance Institute’s Level 1 certification course, which investigates the body-swing connection and how physical limitations or abilities directly impact one’s golf swing. He uses his Certified Strength and Conditioning Specialist training daily for his own programming and that of his clients. He has trained in CrossFit, Olympic lifting, running and cycling throughout the past 10 years. Ryan lives with his wife Erika in Atlanta and is looking to continue adventuring and trying new things while bringing true healing to those in his community. Ryan is a member of the American Physical Therapy Association (APTA)-Orthopedic Section

Running is where is all started for Kate. Her first race was the Hyannis Half Marathon in 2003. She had no idea what she was doing. She did everything wrong: trained inconsistently, did a nine-mile-long run, wore brand new shoes, went out too fast...the list goes on. Though she finished in 1:46:34, she was sick for the next several hours, sore for days and subsequently ended up in physical therapy for a knee injury. Does any of this sound familiar? Several years later, once in PT school, Kate qualified for and ran in the Boston Marathon three times and began dabbling in triathlon. Kate is 13-time marathon finisher and has also completed several sprint and Olympic triathlons. She graduated from Emory University School of Medicine in 2009 with a Doctor of Physical Therapy degree. Following PT school, she moved to Chicago so she could do an orthopedic residency at Achieve Orthopedic Rehab Institute. One of the first 1500 PTs in the country to do a residency, Kate frequently talks about how much she learned that year. Several years later Kate now trains other residents in advanced clinical treatment. In 2014, Kate became a mom! She remained active during her pregnancy, running until she was 36 weeks pregnant, and then finally gave in and walked instead. Her experience with running during pregnancy and returning to running postpartum sparked a new interest in helping other moms continue their love for running. She is currently investigating running trends in moms, gathering new research for injury prevention and healthy running postpartum and writing articles and blogs integrating what she learns. In Late 2018 her e-book Return to Running Postpartum will be available to help other moms keep doing what they love! In 2015 Kate founded Precision Performance and Physical Therapy. Her goal: create something different. Spaces where athletes could come and receive exactly what they needed without the influence of insurance companies. She believed that a space could exist where healthcare providers could practice in a healthy collaborative environment away from perfectionism, burnout and compromise of their patient’s needs. Kate is actively involved in the running community. She was a team lead in the medical tent for the Peachtree Road Race, in the medical tent for the Atlanta Thanksgiving Half Marathon and 10-Miler for several years. Kate is adjunct faculty at Emory University, School of Medicine in the Doctor of Physical Therapy program. She has been a faculty research advisor for research projects such as, looking at the biomechanics of running in relationship to dynamic warm-ups; guest lecturer in sports medicine courses, and in 2015 developed and began teaching an elective course called “The Endurance Athlete.” Additionally, she has taught her colleagues, fellow PTs and PT students locally and nationally how to successfully analyze and improve running form, as well as successfully treat injured runners and triathletes. In 2016 Kate was diagnosed with a rare genetic heart disease, ARVC. She is no longer able to run or do triathlon but remains active in both communities. She wrote Racing Heart: A Runner's Journey of Love, Loss and Perseverance, as a coping mechanism and to raise awareness about heart disease in athletes. Additionally, she leverages her position as an educator and a clinic owner to educate healthcare providers and athletes about cardiac disease in athletes. Because of her experience losing her athletic identify she truly understands what it is like to lose the ability to do what you love. Kate has advanced training in osteopathic manual medicine from Michigan State University, in Pilates through Balanced Body, and in Redcord NEURAC, Selective Functional Movement Analysis (SFMA), visceral manipulation, intramuscular manual therapy (trigger point dry needling) and running medicine. She has also been through Bikefit training. Kate earned her Orthopedic Specialist Certification (OCS) in 2010. Her specialties include manual therapy; spine, hip and lower extremity treatment; overuse injuries; yoga injuries; and endurance medicine (specifically runners and triathletes). Kate is a former member of the Atlanta Triathlon Club and the Atlanta Track Club. She is a member of the American Academy of Manual Orthopedic Therapists (AAOMPT) and American Physical Therapy Association (APTA)-Orthopedic Section, Sports Section and Running Special Interest group (RSIG). She is also a mentor for therapists that want to specialize in running medicine through the RSIG.

We kindly ask that you notify us no later than 24 hours in advance for all rescheduling and cancellations. Thank you.

This clinic only accepts appointment requests over the phone. Please call.